These days, ozonators have been used for purifying a number of things such as drinking water and even fresh produce. Most of all, ozonators are good for purifying the water of inflatable hot tubs so that the water we expose ourselves to isn’t dirty and full of chemicals. Even if you have the best hot tubs or even the best above ground pool, it helps to have the best hot tub ozonator on top of it.

How a Hot Tub Ozonator Works

The Spa ozonator have a built-in ultraviolet bulb or an ozone converter that would create ozone out of oxygen molecules. When the ozone molecules are created by the ozonator, they are then forced into the spa water in order to sanitize it. In order to be discharged to the water, the ozone gas is transported through a water jet wherein the jet would act as a vacuum to pull in ozone into the spa water to filter the water. From there, ozone will destroy all the bacteria and viruses and also break down any sort of substance in the water (such as oil or debris) so that the water will be fresh for a longer time. Also, ozonators neutralize bromine and chlorine content without compromising on the cleanliness of the water. Ozone is actually more effective than bromine or chlorine when it comes to cleaning the spa water as its effects last longer.

How to Use the Hot Tub Ozonator

When you use your hot tub ozone generator, you should let it run for at least 3 hours every half a day. If you want better results, then you can actually run it for the whole day. With the ozonator purifying the water, you may now lessen the bromine and the chlorine levels of your spa water because the ozone can do most of the job. You can set your bromine levels at 1.5 ppm and chlorine levels at 0.5 ppm.

Benefits of a Hot Tub Ozonator

When you use an ozonator, you can have the following benefits:

It lessens the use of chemical cleaners and purifiers

With the aid of ozone in your spa water, you don’t need to use any chemical cleaner that may be harmful to your skin in the long run. Hot tub ozonators work very well together with your hot tub cleaner and hot tub pump.

It oxidizes other chemicals found in the spa water

It is able to neutralize and oxidize the effects of chemicals such as iron, manganese, chlorine, hydrocarbons, sulphides and much more if they are found in the spa water.

It easily kills off harmful substances

It can destroy a lot of unwanted substances such as bacteria, molds, fungus, and viruses.

It reduces maintenance effort and costs

With the ozone generator, you don’t need to do so much maintenance work anymore because the ozonator can do the work for you. There is no need to buy so many chemicals and test the chemical level of the water.

It gives the spa water a natural smell

Unlike when you use a lot of chlorine, the spa water will not smell like chemicals anymore.

It is good for the health in the long run

Too many chemicals such as chlorine and bromine are not good for the health in the long run. Exposing them to your skin or even inhaling them through your nose would have a lot of health consequences in the future. With ozone though, everything is natural, so you won’t have to worry about health problems caused by it. 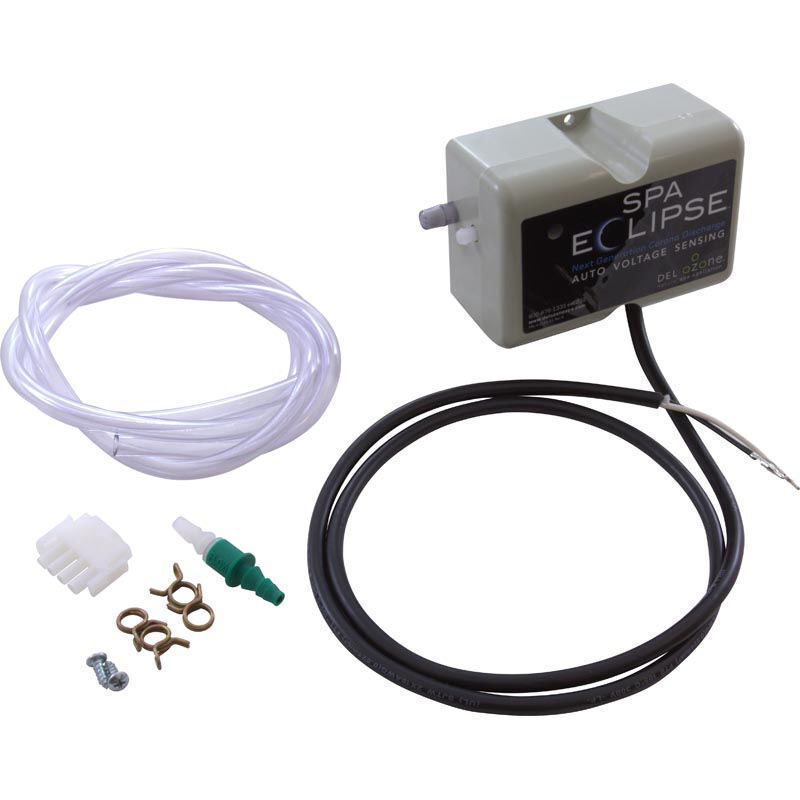 The Del Ozone Spa Ozonator works on a chip technology that conserves energy while still efficiently completing the job. There are few wires and circuits which would make it less prone to short circuits. It is also resistant to water and conserves power in its UV system.

Things We Liked:
Things We Didn’t Like:
Check Price on Ebay

The A2Z Ozone generator is one of the most well-known ozonators in the market with a 300 MG ozone concentration level. This makes it one of the best purifiers on the market. It is also known for its compact size, making it easy to carry around and bring on trips.

Things We Liked:
Things We Didn’t Like:
Check Price on Ebay

This ozonator has all the features that an ideal ozonator would have such as the ability to oxidize the chemicals in the water and sanitize the water as a whole. It is also known for its extremely easy installation which makes it the ideal ozonator for those who are not very savvy with machines.

Things We Liked:
Things We Didn’t Like:
Check Price on Walmart 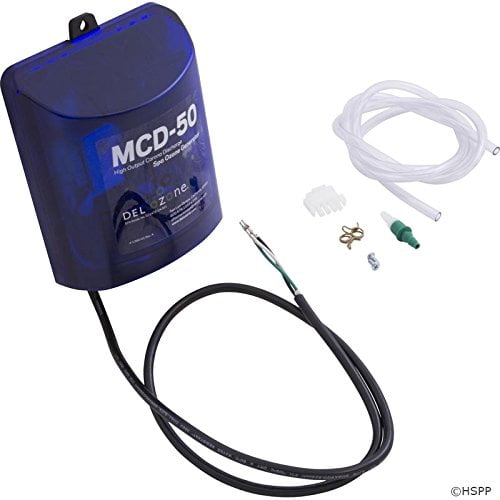 This Del ozonator is very well-known for its high-quality system which is able to clean and sanitize pools of hot tubs efficiently. It is also popular for its durability and long shelf life. It can even run for five years.

The Ultrapure Ozonator has a high level of Ozone created and also has a very long lifespan. It also has a corona discharge chip that can help save energy. Its advanced technology allows for it to have an extended lamp life. Moreover, it has an overall long shelf life, which means you can use it for about four to five years.

Things We Liked:
Things We Didn’t Like:
Check Price on Walmart

By going through these five hot tub ozonator reviews, we can see that the clear winner of the five products that are listed above is the Ultrapure brand. This is because it has all the ideal features of a hot tub ozonator, and it can also save a lot of energy due to its advanced technology of the CD chip. Furthermore, it is very versatile with regard to the output voltage so it can be used in any hot tub pool set. The only con would be its price as it is a little bit expensive than other brands. However, spending a bit more for better quality is definitely worth it and even more practical in the long run.

Through the reviewing of several products, we are able to compare and contrast the pros and cons of each, making it easier to choose which one is the best. Selecting the best one will be much easier through this process. In the end, the best ozonator would still depend on the type of hot tub you have, as well as the criteria of your personal preferences.